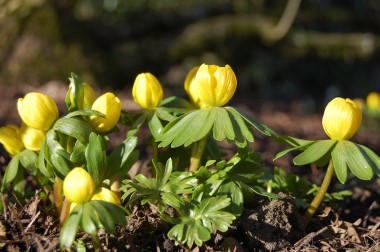 If we remember back to when we were at school, some teachers are recalled with affection and some less so. We had a maths teacher who was brilliant at spreading light on quadratic equations and logarithms but one morning she held up before the class a small yellow flower.

"Who wrote an Ode to a celandine?" she asked. When none of us answered she told us it was, "John Keats".

I tentatively put up my hand and said, "but miss, the flower in your hand is an Aconite". This caused amusement but from a very early age I was encouraged to seek out various flowers as they came in bloom, record the date seen and pick a specimen to press into an album. I knew therefore that the winter aconite was always the first flower of the year. Having a much thicker stem than a celandine it comes from the centre of a green ruff which supports the yellow flower above. The flower is spherical in shape before opening to reveal a circle of golden anthers.

Tubers can be bought and it is said can be compared with dried sheep poo but if acquired this way should be soaked overnight before planting 1 inch deep and 2-3 inches apart. Much better though to buy them in the green and don't bother to split them up but plant them in small clumps and you will find they will agreeably seed themselves about. Also give them a sporting chance and not plant in heavy shade and you will be well rewarded for your kindness.