How to prune Raspberries 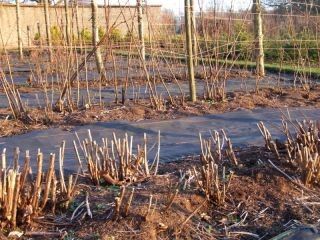 Raspberries offer gardeners one of the greatest returns on investment of any garden plant. Easy to grow, easy to prune, easy to jam, easy to freeze, or even stuff ones face with straight off the cane. Personally speaking I don't much like them, too acid for my taste and the bloody pips get stuck between my teeth and I spend the rest of the day trying to prise them out with either fingernail or tongue, which isn't healthy if you saw the state of my hands and nails!There are two types of raspberry, summer fruiting and autumn fruiting. Summer fruiters are generally sub-divided into early, mid, and late; the earlier varieties start producing about the beginning of July, mid seasons a couple of weeks later, and late's a couple of weeks after that.Autumn fruiting raspberries come into production during August and continue bearing through to the first frosts. Up until 2010 we have been picking raspberries at Eggleston Hall Gardens on Boxing Day. Such was the beneficial effect of warmer winters. Since then winters have been a touch more knacker shattering and vastly different from those we had become accustomed to in recent times.

Pruning differs for summer and autumn types; having bought your canes and planted them about 45cm/18inches apart, cut them back to 15cm/6inches and leave alone. A few vigorous new canes will arise during summer and these need to be tied onto wires strained between posts. Do not worry if only one or two canes are produced in the first year, this is quite normal.

Summer fruiting canes will bear fruit the following year, when new canes will be produced once again, though this time you will need to cut out completely all the old fruited canes....that's how it works each autumn....tie in the new, cut out the old; easy....a monkey could do it.

Autumn fruiting are easier still; you'd need to be a real nob not to understand this. The canes will bear fruit in their first year. Cut them all right back to 10cm/4inches every February thereafter. A thick monkey could do that.

You can see from today's picture of the Eggleston Hall Gardens raspberries, autumn fruiters in the foreground cut back, and summer fruiters beyond tied in, although whoever did these needs a lesson in what four inches looks like! It was obviously a man who can't tell his four inches from eight.

As far as choice of varieties goes, choose your own. Flavour, acidity, and sweetness are personal tastes, that which I find delectable might not be so pleasant to you. It's a bit like music really, I like folk/rock while others like classical, some like wine I like beer. If I have to be totally honest though, I'd probably only bother growing the autumn fruiting varieties such as 'Autumn Bliss' or 'Polka' for of the ease of cultivation.

I once made Raspberry wine.....it was bloody disgusting.