How to sow seeds of Hardy Plants (uncut/unedited version) 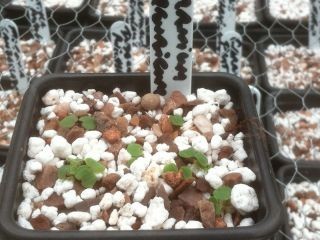 Do not spread your seed upon the dust; Use Grit & Pearlite 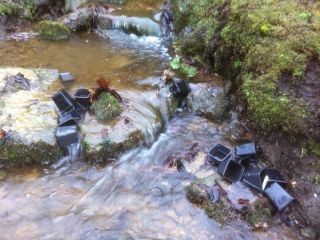 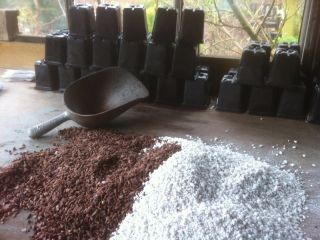 Topping mix; I gave up composts for seed & cuttings decades ago. 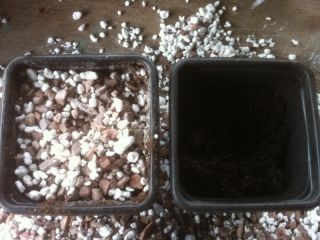 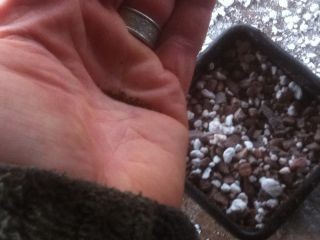 A good crevice is always an asset....like the natural one in ones hand. 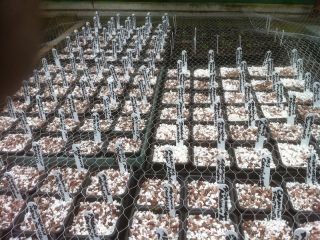 I believe part of mosaic law was that a man should not spread his seed upon the dust. Thankfully God never mentioned a 50-50 mix of Perlite and Horticultural Grit to Mosses, so I should avoid being cast into the fiery furnace with all that wailing and gnashing of teeth.Ten days on from sowing and already the seeds are coming up. Here it is Geranium pyrenaicum, a delightful geranium with masses of small blue flowers during summer, the packets I am given from various expeditions usually have about eight seeds in, and it looks as if they have all germinated which is why fresh seed is appreciably better than old seed. Seedsmen have for many years mixed down fresh seed with the remainder of the previous years stock. Gardening Which? magazine ran some seed viability tests a couple of years back and shamed several seed companies so the habit is less practiced theses days.The seedlings will be pricked out into cell trays and grown on. I would generally prick out at an earlier stage than most people do, I'll do these in a few days time providing its not frosty. I do not wait for true leaves to form as some recommend. It works for me that way.NOTE: Although the pot looks thinly sown, it is because geraniums are not the easiest subject to obtain seed from quickly and easily, consequently you get less. Digitalis would for example produce about a hundred or more seedlings in these little 7cm pots as I will show you at a later date...probably next week.

I have a very lazy method of washing pots before seed sowing. A quick rinse under the small waterfall that comes down from the moor at Plantsmans Corner, then I just let them drift downstream to a pool where they congregate in front of a leaf grid. It is hugely lazy but very effective, I leave them submerged for a day or two then just pull them out and let them dry on the potting bench. I use 7cm square pots for just about all seed sowing.

I do not use seed or cutting compost, it is gutless and prone to compaction, I just use a general potting mix, however I am also a great advocate for the use of a topping substrate. I use a 50-50 mix of 6mm horticultural grit and perlite. The later is a non crystal (amorphous) volcanic glass that holds moisture while being sterile therefor not prone to fungus or moulds. The grit it there for free drainage and to add weight. This 50-50 mix is the sole material I use for cuttings of any form. Again, I do not use compost at all for cuttings.

Seed is then sown over the surface evenly. I use the crease of my hand to sprinkle medium to fine seed. For very fine seed you can mix it with a little crushed perlite or preferably, as I do, a little red brick dust. This shows up well on the topping surface.Large seed such as paeony can be individually poked into the topping 3 or 4 to a pot and to about twice the depth of their size. Medium seed such as Sweet Peas can be ploughed into the topping using a thin cane or pen. Both large and medium seed should then have further topping added to just below the top of the pot.With fine seed such as digitalis I would simply sprinkle on the surface and water in. The same with meconopsis, however you would need to use an ericaceous compost for the blue poppies. This is a well tried and tested method. Water well in and place in a cold frame or similar. Remember some plants can take three years or more to germinate. Do not be impatient, if you are then go pay nurserymen like me to do it for you.

The seed pots have been lined up and a barrier method with wire netting employed to keep a range of pests out. At Plantsmans Corner the main pests consist of Short tailed Field Voles (Little Bastards); Mice (Long Tailed Little Bastards); Partridges (Feathered Bastards); Pheasants (Long Tailed Feathered Bastards); Molluscs (Slimy Little Fuckers); and very occasionally unwelcome children (Horrible Little Fuckers).I would apologise for the vulgar terminology but don't feel inclined. A pest is a pest, and while I would prefer the use of natural organic methods of control, unfortunately these are rarely effective so I therefor have on occasions resorted to traps, shotguns, pellets and a very large boot when the parents aren't looking......perhaps they should likewise have thought about barrier methods.....and me a Catholic boy!