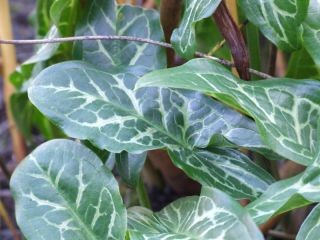 The delightful 'Arum italicum pictum' has been with us since the mid 1600s and is a plant beloved by flower arrangers (I spit on their scissors) for the interesting arrowhead shaped leaves and marbled venations.

There are many Arums of this and similar species, and as a consequence, many common names, such as Arum Lily; Cuckoo Pint; Dead Man's Fingers; Man-in-the-Pulpit; Old Nick's Knackers; Dog's Dibble; Priest's Pintle; Stiffen my Stick; and a whole host of others, though perhaps the most renown was as a result of Elizabethan gentry using juice from the tubers for stiffening their ruffs hence the well known 'Lords and Ladies'.The plants bear clusters of poisonous berries late in summer and these are an attractive orange-red, lasting for many weeks surrounding the short erect stems.

It is a fallacy that the arums are woodlanders; they thrive as well in the sun of our nursery rows as they do in dappled shade. I believe these plants are always worth a place in any garden, though perhaps not if you have small children and wish to keep them.

I am reminded that both Hellebores and Arums were once used as a remedy for worms in children and the great naturalist Gilbert White commented 'Where it killed not the patient, it would certainly kill the worms; but the worst of it is, it will sometimes kill both' ......Praise be for modern medicine.