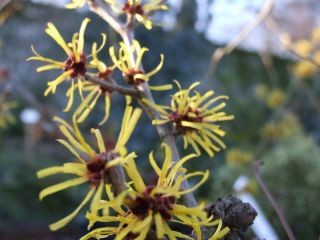 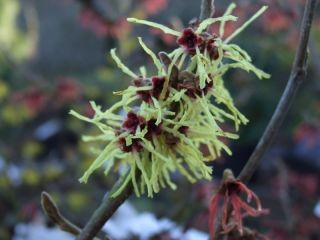 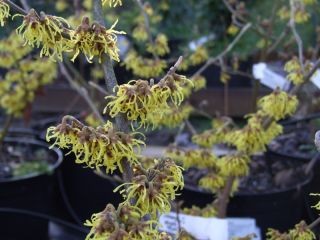 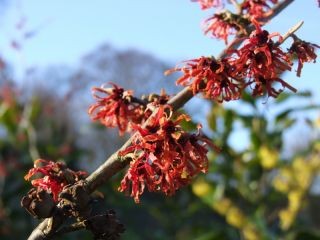 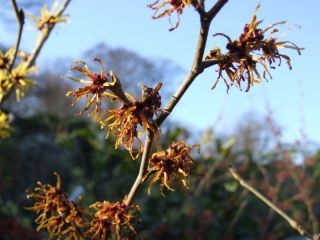 We grow five distinct Hamamelis that I believe span the whole range potentially of interest to general gardeners.

The 'Witch Hazels' are a distinct and beautiful genus of mainly winter flowering shrubs or small trees with 5 or 6 species in E North America and E Asia. In the majority, the spider-like yellow or reddish flowers appear on the normally leafless branches from December to March. The curious strap shaped petals withstand the severest weather without injury, and the hazel-like foliage usually provides attractive autumn colour.

Hamamelis mollis is quite simply the 'type' species as opposed to being a selected variety of the species, in other words it is the original form, I know it sounds complicated but trust me, it isn't. You may observe that a plant of mollis has been grafted, so you may ask why bother grafting?

To be brutally honest it’s to attract customers, who almost to a person prefer to buy a plant that has a flower on no matter how piddling the specimen is, a flower always helps sell! A grafted plant can flower many years sooner than a seed grown plant, which can take up to ten years to produce a flower, most of my grafted hamamelis are flowering in their first year.

Of course there is the important matter of it being “true to type” as seed grown plants are variable in colour, form, and habit, whereas grafts are effectively clones. So what you see is what you get if your buying with knowledge of a particular variety you like rather than on impulse.

Hamamelis mollis 'Pallida' is deservedly one of the most popular varieties of witch hazel. The large, sulphur-yellow flowers are borne in densely crowded clusters along the naked stems, and paler than straight mollis, the clue being in the name “Pallida” the scent is strong and sweet, yet delicate, later in the year there is amazing yellow autumnal colour. All mollis is the group known as 'Chinese Witch Hazels' and varieties within this group flower from December to March and originally introduced in 1879 by Charles Maries, then again later on by E H Wilson.

Hamamelis x intermedia 'Arnold Promise' is really a hybrid, in the sense it is a variant of a cross between the japonica and mollis species, as the name suggests 'intermediate' between the parents. Regardless of that customer impressing bollocks, it is a fine plant and I am proud to list it amongst this selection. Arnold Promise is from an original seedling raised at the Arnold arboretum in 1928 and makes a vigorous, large, spreading shrub; bright yellow 'crimpled' flowers are borne freely from December to March.

Hamamelis x intermedia 'Diane' is of Belgian origin, the chance seedling arising at the 'Kalmthout' arboretum over there. Some say it is the best red, others disagree, I would say it is certainly amongst the best reds, however the autumn foliage colours of rich gold, orange and red swing it for me. A fine variety I wholeheartedly recommend.

Hamamelis x intermedia 'Jelena' is another of Belgian origin; once again this chance seedling arose at the 'Kalmthout' arboretum and is my very favourite witch hazel, although its original name in the days of my youth was 'Copper Beauty'. Jelena has been around since the period between the wars which makes it rather older than most people imagine as 'Jelena' is often referred to as a new variety. It is a stunning clone with a spreading habit and large, broad, pubescent (softly hairy) leaves that colour dramatically during autumn. The clusters of crimped copper flowers are suffused with yellow creating an almost two-tone effect; these are borne in the bleak midwinter and really raise your spirits through the cold times. Named after that great and wonderfully eccentric Belgian gardener Jelena de Belder who we will all have met through one of her plants at sometime in our gardening life.