Harmony; A potato so vile even nematodes slither away. 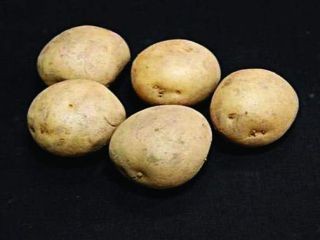 I love spuds me! Bugger the rice, and double bugger the stinking pasta. No matter what sun drenched or Mediterranean inspired sauce one floods it with, it still feels like chewy snot. Not so spuds; baked, roast, wedged, mashed, boiled....... even sautéed if ones into poncey cooking.......I think it just means fried anyway.  I'm no culinary Philistine, far from it, I just like potatoes.

Until I recently sampled the variety of the moment called "Harmony" which in my less than humble opinion would be better served left in the ground to rot were it not for the fact it's just about resistant to every potential pest, which only goes to prove that even diseases have standards. It really is a crock of shyte.

I am not aware of it being of genetically modified origin, but if ever my imagination was to consider the taste of a GM spud Harmony would win hands down. The thing tastes like it has butter added, not nice creamy butter but a chemically contrived additive butter.  It's watery, weak, wet, and thoroughly insipid. I cannot write with enough hostile venom to describe this variety and suggest the supermarkets that seem to be having a love affair with this rancid piece of poo are doing so for purely commercial reasons (no change there then), to the point that at our local Morrisons in January it was the ONLY potato on offer......Life is full of trials and hardships and a good baked potato is a comforting food in austere times, so I would implore the potato council to confess up and admit that this abomination, this Frankenstein of a solanum, this complete freak is best banned from our good earth.

I thought "Homegaurd" were bad enough.....whatever happened to Dr Mackintosh?