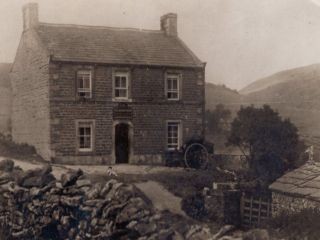 'We are where we are' seems to be a popular saying these days; usually by politicians who don't want to discuss their most recent balls up.

We are perhaps, the sum total of our past, and, having enjoyed both formal Horticultural training alongside traditional 'potting shed' teaching from the 'Big house' I often ponder how I got to where I am.

Undoubtedly our potting shed was incredibly informative in 'all' areas of learning as my first head gardener and mentor, Alf, knew and practiced everything!

I learnt of folk songs, beer, smoking, fornication, obscene language, the useful life of a woman, poaching, projectile spitting, sexual diseases, communal flatulence, what my tadger was for, black market fruit and veg, Christmas tree rustling, snare setting, arse bandits, village bikes, illegal distilling, cannabis growing, the uses of urine, songbird trapping, Jay plucking, and an incredible amount of gardening along the way!....There was no political correctness and the potting shed was a refuge from outside life, it was a safe haven where gardeners laughed, worked, and generally put the world to rights.

There was of course the inevitable teasing and practical jokes...Geoffrey Smith who started his working life at the garden which is now 'Plantsmans Corner' was once sent out with a wheelbarrow to fetch some post holes!

A friend of mine was sent for skyhooks; and I was told I'd got a local girl pregnant by kissing her at the Mayday celebrations in South Harting...What's more I believed the bastards and went home and confessed to my Dad who near wet himself laughing! It was a time of simple pleasures and I drank my fill for a while! When the time came to leave Sussex and Alf behind I knew I would never go back, I had been fortunate to experience the falling autumn leaves of a bygone age, Alf was one of those leaves that in his own way nourished that naive young gardener, he was a character of his time who impressed on me his pure lust for life, enjoyment of simple things, enthusiasm, mischievousness, and contentment.

Alf wasn't the worlds greatest gardener and he could be a tyrannical old sod, but my life was enriched for knowing him and he set me on a golden path.

My greatest memory of Alf was walking past his cottage in the village as he was coming home from the pub, it was a Saturday night because Vera his wife was with him (traditionally she accompanied him out on Saturday nights, but not during the week)....they greeted me and Vera went in to 'put the supper out'...Alf looked to me as we watched her waddle off up the path (big woman Vera) and said in his thick Sussex burr  ....

'Y'knows boy, her main't be no oyley paintin' but her is the best companion a man could 'ave'.

Which would have been very profound had he not been giving the butchers widow one every Tuesday afternoon.

But that's another story.