A Brief History of the Victoria Plum 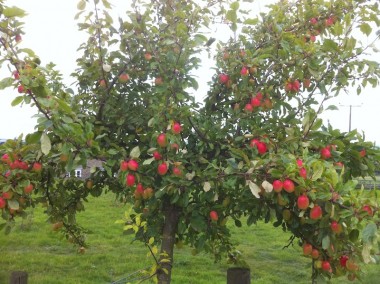 The average gardener with a little space often turns his mind to fruit. Apples, Pears, Plums, and some of the rarer oddities such as Medlar, or Quince. As nurserymen we are commonly asked for certain varieties of fruit, of which certain names are highly predictable.

These well known varieties are often the only ones the customer knows, probably for good reason, they were likely the ones their Grandfather grew.

The relationship between Grandfather and Grandchild regarding gardening, certainly pre television era, is historically one of awe and wonder, often responsible for introducing many into the world of horticulture, although it would never have been called anything so grand. It would have been “gardening” without the need or desire to impress anyone.

The three varieties mentioned all have their place, but conversely all have their problems, the Victoria plum less so as we’ll come to in a few moments, but Cox apples, particularly in the North, are prone to scab, mould, and poor cropping due to a distinct lack of disease resistance. While Bramley apples suffer none of this they are almost moodily prone to “Biennial bearing” inasmuch as a heavy crop one year is followed by few fruit the following year. Annoying but still a highly worthwhile apple. I would not provide garden space for Cox but would certainly consider Bramley, though I might be tempted to substitute Lord Derby or grow both if space permitted, which would cover the Bramleys temperamental years.

So we come to Victoria, that bastion of everything plumy in the orchard;

History relates the Victoria was discovered in a garden in the Sussex village of  Alderton by a nurseryman call Denyer who originally named it “Sharp’s Emperor” however history does not record there was ever a Sussex village called Alderton. Most likely is that the plum was from the “Suffolk” village of Alderton where coincidentally lived the Gage family who had bred many plums.  In 1837 Denyer changed his plums name to “Denyer’s Victoria” which I believe was the year that particular monarch was crowned. Seven years later in 1844 it was introduced into Sweden where it became incredibly popular as a commercial variety, eventually finding its way back to our own orchards for reasons easily understood.

100 Years ago in 1913 according to the then Board of Agriculture, 17,000 acres of land were devoted to the growing of Plums on these islands, England accounting for 16, 418 of them. Worcester with 3815 acres, Kent with 3269 acres and Cambridge with 1577 acres. Middlesex, Bucks, and Gloucester just about accounted for the rest. Assuming the recommended standard close spacing (often underplanted with gooseberries) of 12-15ft was observed, that would give 250 trees per acre, each with an average yield of 2 bushel depending on variety. The bushel was about 8 gallons dry volume (approx 1000 plums) and returned 6 shillings. This would have equated to a gross return of £150 per acre or by todays standard £9000 per acre even without the underplanted Gooseberry crop. The cropping potential of Victoria plums could be twice this so little wonder the variety became so popular.

Though it was not without its detractors as the gardening writer John Weathers noted in 1911... “Very few dessert plums of market growers, including Victoria, are included in the Royal Horticultural Societies list of dessert plums, to the fastidious patrons of this society any plum that bears fruit with vulgar regularity must be a cooking plum; If in its esoteric superiority it bears but now and then, dignify it with the title dessert”

Furthermore, Weathers went on “The Victoria has so captured popular favour that, it is well nigh impossible to get any other plum justice during its season, albeit the other plum may well be much superior quality”

In his own review of varieties he wrote of the Victoria; “Everyone knows of this little  bright-red plum, perhaps the most popular grown. It possesses all the characteristics a good plum should possess, except flavour. For the market grower it pays the best of any. It occasionally bears so profusely as to require thinning of the fruit. If this is done in early July the thinned plums can be used for green-plum jam or for bottling.”

A full century later I see nothing in Weathers words to change. It is a good, reliable, workaday plum for both dessert and cooking, especially here in the North East where it will serve the average gardener well.

And we always sell them at Eggleston Hall Gardens